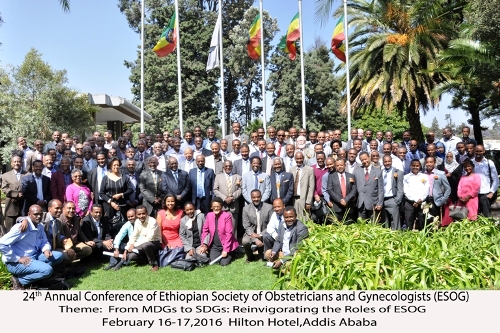 The Ethiopian Society of Obstetricians and Gynecologists (ESOG) held its 24th Annual Conference at Hilton Hotel on 15th through 17th February, 2016. The three days event was considered an opportunity for the more than 260 members of the Society, partners, researchers and other invited guests to meet and share views on From MDGS to SDGs: Reinvigorating the Role of ESOG, among other issues.

The annual conference officially kicked off on the second day, i.e., 16th February, 2016. The official opening of the conference brought together members of the Society, partners, and invited guests both from local and international institutions including the Federal Ministry of Health (FMoH) represented by HE Dr. Kebede Worku, state minister. Also present were Dr. Dereje Negussie, president of ESOG, Dr. Yirgu G. Hiwot, the past president of the African Federation of Obstetrics and Gynecology (AFOG) and officer for the International Federation of Gynecology and Obstetrics (FIGO), Dr. Thomas Gelhaus, president elect for the American College of Obstetrics and Gynecology (ACOG) and Pr. Aristidis Antsaklis, former president for the World Association of Perinatal Medicine.

“The contributions of ESOG are both at the policy level as well as operational levels. FMoH is very keen to collaborate with ESOG in every way possible in the years to come,” said Dr. Kebede in his opening remarks.

The President’s remarks reviewed generally on the activities undertaken by the Society the past year: the CDC funded project of PMTCT; the UNFPA funded project of Sexual Assault Clinical Outreach Project and the ongoing collaboration between ESOG and ACOG for the establishment of the Ethiopian College of Obstetrics and Gynecology (ECOG) are among the issues Dr. Dereje dwelled on during his opening speech.

“As the sector’s stakeholder, ESOG is gearing up to stand up to the challenge, and contribute its share with the involvement of its members and in collaboration with its partners,” the President assured the gathering.

The bilateral collaboration between ESOG and ACOG for the establishment of ECOG was duly noted by none other than Dr. Thomas, the other personality who took the podium for a keynote address. The collaboration that started at ACOG’s office in Washington, USA on December 7, 2015 continued at ESOG’s office on February 14-15, 2016, according to the President Elect. These two meetings are meant to result in a five year project in which both organizations will partner.

“ACOG will provide support under ESOG’s lead… bring many of our experts and staff to provide that support,” said Dr. Thomas.

As the past president of the African Federation of Obstetrics and Gynecology and recent elect the officer for FIGO, Dr. Yirgu also addressed the gathering. Dr. Yirgu, on the other hand, focused on the unfinished agenda of MDG 5. “For us [sub-Saharan Africa] MDG 5 continues to be an unfinished agenda,” he said. Dr. Yirgu was referring to the two third of the about 303,000 maternal deaths, which are reported to have been from the region.

Opening and keynote speeches were not the only faces of the 24th Annual Conference of ESOG. The three days even was also accompanied by Continuing Medical Education (CMEs) on Perinatal Medicine and Diagnostic Ultrasound, Maternal Death Surveillance and Response (MDSR), Urinary Stress Inconsistence, MEC, Abortion Care and Zika Virus during Pregnancy, all of which were conducted on February 15 and Gynecology Oncology on February 17, 2016.

The business meeting among members of the Society was the other happening at the Conference. Members thoroughly deliberated on the newly drafted social welfare constitution and the growing trend of medical liability among medical professionals in Ethiopia.

As one typical to ESOG’s Conferences, the 24th Annual Conference of ESOG was not concluded without a series of scientific paper presentations by gynecologists and obstetricians from various institutions around the country and thorough deliberations on them.

Please visit our facebook page- facebook.com/esog for our latest photo gallery from the 24th Annual Conference of the Ethiopian Society of Obstetricians and Gynecologists.

We are now making our final preparations to conduct the 24th Annual Conference of the Ethiopian Society of Obstetricians and Gynecologists (ESOG) colorfully at Hilton Addis Hotel in Addis Ababa, from Monday February 15- Wednesday 17, 2016.

This year’s annual conference is organized to be memorable and one of the best in its kind as we have finished our last laps of the Millennium Development Goals (MDG) and reorganizing our efforts to the challenges of the Sustainable Development Goals (SDG).

There will be a panel discussion on: From MDGs to SDGs- Re-invigorating the Roles of ESOG. Distinguished panelists will speak on the unfinished agenda of MDG5, the role of ESOG and overview of SDGs.

Two Pre-Congress parallel Continuing Medical Education (CMEs) and one post-conference CME is also organized. There will be 16 papers to be presented in the scientific secession.

The usual social event of cocktail dinner will give you an opportunity to network with your colleagues and partners working in Reproductive Health (RH) sector in Ethiopia and abroad.

Please come and join us and be enriched by the science and friendship that the ESOG Annual Conference has to offer. I believe this experience will re-energize you to provide the best to the women and newborns under your care.

With my sincere regards,

President, Executive board of the Ethiopian Society of Obstetricians and Gynecologists (ESOG) 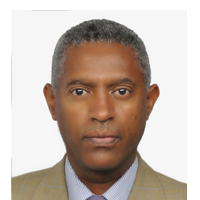 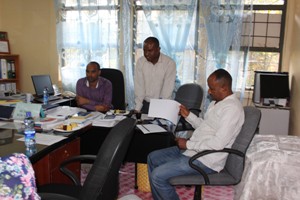 Sexual violence model clinics which were operational as of August, 2014 at Ayder Referral Hospital, Jimma University Specialized Hospital and Gondar University were handed over to the respective universities and hospitals by the end of December, 2015. The model clinics were funded by UNFPA. 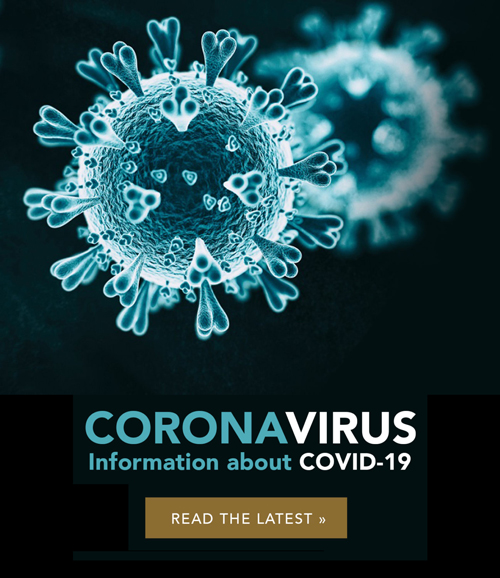